Episode 1 of the documentary serial, UFC Primetime: St-Pierre vs. Hendricks, premiered Wednesday night and took fans inside the lives and camps of both welterweight champion Georges St. Pierre and challenger Johny Hendricks as they head into their UFC 167 main event bout next month. Watch the full episode above to see what kinds of training St. Pierre is doing in Montreal and Hendricks has been doing in Dallas.

A couple things stood out to Cagewriter while watching UFC Primetime. First off, St. Pierre seems completely focused on motivated to fight Hendricks.

When you're champ as long as the Canadian has been, there's always the question of if you can stay motivated to keep doing what you've been doing. In St. Pierre's case, there's been indication that he's already thinking of retirement.

In episode 1 of Primetime, however, we see a St. Pierre who is either a really good actor or that he is truly obsessed with Hendricks. Unfortunately, we'd already seen enough commercials and "films" that he's appeared in to know the former isn't the case.

But take two examples from last night's UFC Primetime to let the point sink in. St. Pierre talks about learning recently during a media tour to promote the fight that Hendricks was planning to get to Las Vegas - the site of the bout - three weeks early in order to train in and acclimate himself to the regulation-sized Octagon.

St. Pierre lost his mind thinking that his opponent might have even the smallest advantage there and so says he purchased and and had constructed a full-sized UFC Octagon replica in the Tri-Star gym in Montreal where he trains.

Also, Primetime shows that St. Pierre and his coach Firas Zihabi have brought in Rick Story to train with the champ in preparation for Hendricks and UFC 167. Now, Rick Story is an excellent fighter but he's certainly not red-hot or appearing to be at his all-time sharpest of late.

Story has lost two out of his last three bouts and four out of his last six. However, Story is the only person to have ever beaten Hendricks in an MMA bout, back in 2010. Therein lies his true value to the Hendricks-obsessed St. Pierre.

There's lots of fun intimate, family time and training footage in episode 1 of Primetime, but the main other take away for us was simply this - Johny Hendricks may have been the most adorable little kid in America.

While learning about Hendricks' life growing up in a tough, wrestling family, we're treated to photo after photo of Hendricks being way too cute for anyone's good. As fearsome as he looks now as a grown man and knockout specialist, it is hilarious to see pictures of a chubby-cheeked and wide-smiling little Johny in Primetime. 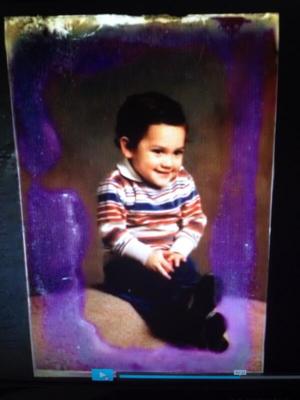