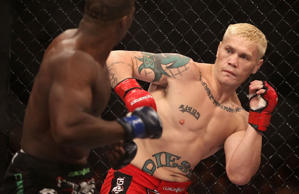 "It means everything to me. To be able to take care of my family is the only reason I'm in this for...I'm so thankful," Riggs said in his post fight interview.

The hard-hitting Riggs seemed content to stand and strike until Bronzoulis started to eat up Rigg's lead leg with kicks. At that point, Riggs appeared to change up his strategy and ended up winning all three rounds with take downs and positional control on the ground.

Several times, Riggs was able to secure the side mount and take the back of his opponent. With the win, Riggs earns $100,000 and a place in the next Bellator welterweight tournament.