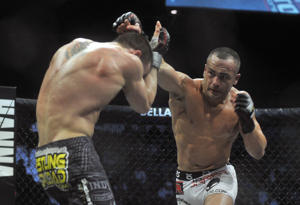 Bellator 106 featured three title fights on Saturday night, with all three going the distance but still providing drama and a fast pace. In the main event, Eddie Alvarez was awarded a controversial split decision win over the man who took the Bellator lightweight title from him two years ago, Michael Chandler.

Evidently, a last-round submission surge from Alvarez was enough to convince the judges that he deserved the win. Over four rounds, Chandler looked to have gotten the better of Alvarez in a competitive war through excellent head movement and sharp striking on the feet combined with take downs, slams and positional advantages on the ground.

The 4th round was the most dominant for Chandler as he grounded Alvarez and pounded him with punches and elbows. Alvarez came back strong in the 5th, however, and nearly finished Chandler twice with a rear naked choke before the final horn sounded.

Scores were 48-47, all around, with two judges giving it to Alvarez.

"It takes two people to put a fight on like that...another fight of the year," Alvarez said in his post fight interview.

A clearly surprised and frustrated Chandler downplayed his disappointment saying that the loss was, "just another fight. I've got to get back to the drawing board and see what happens next.

Emanuel Newton proved that his first win over Muhammed Lawal last Feb. was no fluke as he won a clear-cut unanimous decision over "King Mo" to claim the interim 205 pound Bellator title Saturday night. Scores from all three judges were 49-46 for Newton as the fighter out of Long Beach used excellent take down defense and unorthodox striking to win.

Despite their earlier war of words, "The Hardcore Kid" was eager to heap some self-serving praise on Lawal.

"Mo put up a good fight. I'm not going to face another wrestler like that in MMA and that makes me very excited," Newton said.

"After fighting Mo, Attila Vegh ain't got nothin' for me," he said.

Daniel Straus withstood a low blow and a knee to the head while he was grounded from Pat Curran to win a dominating decision and the Bellator featherweight title Saturday night. Straus came out and won the first round on the strength of a good 1-2 combination and a take down but Curran came back in the second round and used effective stand up striking to even the score.

In the third round, Straus tossed Curran on his back, Curran got back to his feet immediately and threw a knee to the head of Straus that connected. The only problem was that Straus was still on a knee and the knee was illegal.

A point was deducted from Curran but Straus continued the fight after being checked out by the ringside doctor and immediately took Curran down and passed his guard. That pattern would continue throughout the fight as Straus clinched, grinded out and rode Curran to his unanimous decision win.

"It's a good feeling. I worked really hard with my team at ATT…Pat Curran is a tough dude. I will see him again," Straus said.